The 19th party congress of the Chinese communist party was inaugurated in Beijing on October 18, and has been the focus of China related media reporting for the past few weeks. Six Year Plan has made an analysis of the congress work report, that we have summarized in this report. This has been done in cooperation with Patrik Andersson, a Swedish sinologist.

In the attached analysis, Six Year Plan has taken a somewhat different approach. Our analysis is based on the original Chinese language version of the work report delivered by general secretary Xi Jingping at the first day of the congress. The work report sets the direction of party work for the years to come, and in most respects, indicate a continuation of the direction set at the 18th party congress.  What stands out from the 19th party congress is an even tighter political control of all aspects of society, emphasizing party leadership over all work, and an even more ambitious agenda for strengthening nationalism and China’s position in the world. Economic and political reform are also covered in the report, but both areas receive comparatively less attention compared to previous work reports. 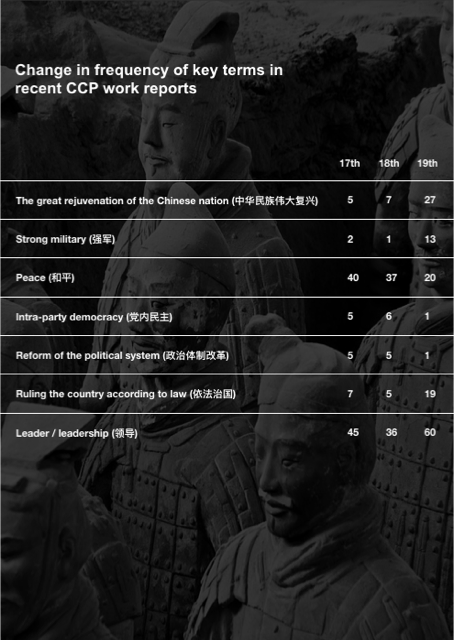 Some key take-aways are:

The report called for greater market access for foreign enterprises, and for opening up the service
sector to foreign investments.

It reaffirmed China’s intention to develop world-class manufacturing and technology industries, and
its commitment to innovation in the economy.

Tensions remain between ambitious market reforms and a continued strong support of state
ownership and leadership in the economy.

The report struck a nationalistic tone throughout, putting great emphasis on the “Great Rejuvenation
of the Chinese Nation”.

The report makes clear that the party’s control over society is going to further expand and tighten in
the following years.

To operate in this complex environment, a number of areas will become increasingly important:

To download the report click here. For questions about the report and information on how you can improve your organisation’s China practice email our Managing director Pär Uhlin at par.uhlin@sixyearplan,se